The month of August was very significant for the nation as it celebrated the 52nd Anniversary of Merdeka Day. It is important to reflect on the challenges where all the different communities live in unity and harmony. For national unity to be sustainable in the new era of knowledge, globalization and freedom, it must be based on equality, justice and mutual respect. This is the concept of 1Malaysia.

Time passes by so quickly as this is the last quarter for the year. There will be continuous multi racial festivals with Hari Raya and Deepavali coming along the way. As for our Alumni, come October we will be leading a delegation to Japan for the 8th World Convention and to jointly celebrate the 50th Anniversary of AOTS formation.

We had a busy schedule during the past 2 months. The trip to Forest Research Institute Malaysia (FRIM) on 26th July attracted a good crowd of 42 participants. The group spent half the day to appreciate the nature and fresh air in the park. The beautiful green environment is truly a place for city folks to relax and unwind.

Branch activities are important to us. On 24th August, together with our committee and staff members Mr.Yap CM and Angela we visited the Southern Branch-Johor. The meeting was held at Cyberport building with the Johor Branch chairman Y.B. Salikon and his committee members. We were given a brief introduction of their ICT progress and their development. The committee proposed to invite AOTS Japan to support on the research and development in “Animation and Cyber-Games”. Further to our visit, we seek the southern region for their commitment to organize more activities, as we will extend full support to realize this objective.

It was a privilege meeting Y.B. Dato’ Mustapa Mohamad, Minister of International Trade and Industries on 25th August in his office. Our team members were represented by Mr.Yap CM, Mr. Siao and Siti. During the meeting, we briefly explained the activities and programs undertake by AOTS and PAAM. We shared with the Minister our intention to host the next AOTS World Convention.

Courtesy Visit to the Minister of International Trade and Industry (MITI)

As for this year, we had the making of Chawan Mushi, Okonomiyaki (Osaka Style) and Bento (Japanese Lunch Box). All the recipes are of traditional Japanese origin.

The 1st cooking demo was by Mr K.T. Khor (our Assistant Treasurer). He demonstrated the art of achieving a “soft & smooth” texture of the chawan mushi. After the demo, everyone got to taste a cup of chawan mushi. Mmm, yummy were some of the comments and some even had a second helping.

The 2nd cooking demo was by Ms Miki-san & family (Japanese Hippo family Club). She demonstrated the method of making traditional Okonomiyaki (Osaka style) using Japanese yam as a portion of the ingredients mixed with flour to make the dough. Several Japanese ingredients were added to the dough and then fried without oil.

Wow, the smell produces was beyond words. Once the fried dough mixture was done, the top was spread with okonomiyaki sauce, spring onion (chop) and bonito flakes. The bonito flakes were so light that you could see them dancing on the okonomiyaki. The best part was EATING a piece of the okonomiyaki. OYISHI, ICHIBAN. Needless to say, everyone was grinning from ear to ear.

The 3rd cooking demo was by Ms Sazae-san & family (Japanese Hippo family Club). She demonstrated the art of preparing Bento. Bento is a meal box with an array of rice, vegetables, fruits beautifully and creatively made into shapes of faces, flowers, animated characters, etc. for the Japanese children to take to school for their lunch. Unlike Malaysia, there is no canteen in Japanese schools.

Everyone is so amazed by the creativity of Ms Sazae-san and her patience (as it is so time consuming). This tradition of packing food into lunch box called Bento. 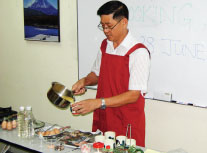 Get to know your Central Committee Members 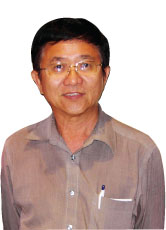 Mr Yap Choon Ming was born in 1952 and is married with two children. He graduated as an Electronic and Telecommunication Engineering (UK). He was trained in Italy, Australia and Singapore and was an AOTS Trainee in Japan too.

Mr. Yap was trained as an Electronic and Radio Communication instructors in Nanyang Institute. He then worked for Olivetti Malaysia as a senior system engineer for 10 years. He then worked as a medical equipment sales engineer in Jebsen & Jason company for two years and he currently managers his own I.T. company in Kuala Lumpur.

KAIZEN literally means “To become good through change”. It comes from the Japanese words “KAI” meaning change and “ZEN” meaning improvement. It is crucial to create awareness that Kaizen strategy is an important concept in Japanese Management and is the key to Japanese competitive success. The gradual continuous improvements are daily routine and good habits to be embraced and applied in our workplace and home.

It is challenging and most satisfying to undertake a new project and to share it, with the people around you, especially when you have finally realized it is successfully accomplished. I am referring to the recently launched “School Project on 5S/Kaizen” at the SMK USJ12 in Subang Jaya on 28th & 29th May 2009. The project started with a talk by our Vice President, Mr. Lim Eng Swee on 5S/Kaizen and an exhibition in promoting good practices of 5S/Kaizen and the culture of Japan, with the support of the Embassy of Japan in Malaysia.

This is a long-term project where we need close coordination and implementation plans to realize the goal of making this a model school on Kaizen in the Klang Valley. The commitment from our organizing committee and the support from the school are fine example of our theme “Getting You Involved”.

We started the project since the beginning of the year, as there were many preparations needed for the school to evaluate and able to share the value of 5S/Kaizen with the teaching staff. The implementation and practices had to be customized to the youth in school instead of the normal industrial practices. Handbooks were prepared and distributed to the 2,200 pupils and 105 teachers. Banners, Posters and Buntings on 5S/Kaizen were designed and placed for the events.

Thanks to all the organizing committee & staff members, the team of dedicated school teachers, the headmistress of SMK USJ12, the Embassy of Japan, the District Ministry of Education and the school’s parent-teacher association and not forgetting the pupils of SMK USJ12 in supporting the activity

The event was graced by the Minister and Deputy Chief of Mission from the Embassy of Japan in Malaysia- Mr. Takashi Hoshiyama & the Researcher/ Advisor from the Embassy Mr. Tojo. Representatives from the District Education Division and the chairman of the Parent –Teacher Association jointly attended the opening ceremony and the exhibition.

This project was well received by the teachers and pupils alike and it is my hope that the launching was just the beginning and to get their awareness. The objectives are to inculcate good discipline and practices for continual and gradual improvement which will result in change for the better.

A group of Hippo Family Club members and their family members came to Kuching for a home-stay program organized jointly by PAAM HQ and Sarawak Branch. They arrived on 27 April 2009 and left Sarawak on 2 May 2009. There were altogether 9 persons in 5 families. 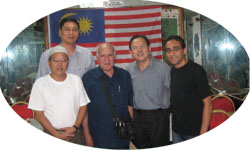 When someone wants you to pass something to him, maybe a plate, he will say SUMIMASEN. After receiving the plate from you, he may even say SUMIMASEN again. When someone accidentally steps on the foot, he will apologize by saying SUMIMASEN.