We have completed the 1st of the two-year term of office and we have called for the Annual General Meeting on 19th April 2009, to present the full report of activities that were carried out. Although this is not the election year, the turnout was very encouraging. The proceeding was very smooth and we were very pleased with the active exchanges of information, ideas and suggestions. We were more than happy to accept 3 volunteers who wished to be involved in supporting and assisting the on-going of PAAM`s activities.

The last quarter of the 1st Year ended with a program which was opened to the public on Inventory Management which was conducted by our seasonal and ever-cheerful speaker, Mr. Alan Lai, who is always willing to share his expertise of his field of practice.

This was a hand-on two days program, where at the end of the 2nd day, the participants who were divided into three teams, enthusiastically completed and presented the assigned project. This is a good program and we look forward to organize them in PAAM branch office soon.It is challenging and satisfying to undertake new project especially when you have finally accomplished it successfully. I am referring to the recently completed “School Project on 5S/Kaizen” at SMK USJ12 in Subang Jaya on 28th & 29th May 2009. The itinerary of the two days event was a talk on 5S/Kaizen and with the support of the Japanese Embassy we were able to put up an exhibition on Japanese Culture.

The commitments of the organizing committee and the support from the school were fine example of our theme “Getting You Involved”. My sincere appreciation to those who have directly or indirectly involved in making this project a reality and special appreciation to the organizing committee, PAAM staff, the students, teachers and the headmistress of SMK USJ12, the Embassy of Japan and the District Ministry of Education. Further to assist the smooth implementation of 5S/Kaizen in the School, PAAM had prepared 5S/Kaizen handbooks that were distributed to the 2,200 students and 105 Teachers. Other printing materials i.e. banner, posters and buntings were arranged in place for the event.

We are glad to receive strong support from our branch offices who have shown strong interest in adopting the “School project on 5S/Kaizen” program as their own project, sharing my belief that educating and coaching the youth is a noble act, as “Youth Today are Leaders of Tomorrow”. Wishing everyone happiness, enjoying life to the fullest and have fun practicing 5S/Kaizen.

One of PAAM’s planned activities for FY2009 is to organize public workshops. A few tentative dates were initially proposed, finally on 18th and 19th March 2009, PAAM had successfully implementing a workshop entitled “Inventory Management” at a hotel in Subang Jaya. The speaker for this 2-day workshop was Mr. Alan Lai, who is also PAAM active member. This training was attended by 10 participants, the minimum number did not deter our speaker to impart the knowledge he had intended. Everyone in the training room was eager to learn new skills and gain knowledge the know-how. The participants were provided with laptops for hands-on exercise throughout the session.

Comprehensive explanation on logistic cycles, inventory analysis, forecast and risk management was presented. We are very grateful to have Mr. Alan Lai not only as our Life member but as our own dedicated trainer. We hope that more members will join our workshops in the near future.

Here are some selected ideas by Cameroon and Chile. We hope some of these ideas are appliacable in your places of work and we wish you every success in your endeavour for Kaizen. Look forward for more ideas in the next issue.

Religion in JAPAN - Mr. Tanaka, What is your religion?

When foreigners ask the question, what is your religion? The Japanese are apt to reply with a lost look, Well! I guest I am a Buddhist… but actually I have not thought about religion seriously. Why this kind of reply? Do the Japanese actually have no interest in religion?

In present day Japan, there are various religions, but Shinto and Buddhism are the two major ones and have many believers. These two religions have deep influences upon the daily life, customs and seasonal activities, such as festivals of the Japanese. For instance, on New Year Day, Japanese go to the Buddhist temples or to the Shinto shrines for Hatsumode or New Year s Day worship and pray for good luck for the coming year. Wedding ceremonies and the rites performed when a child is born are mostly held according to Shinto rituals.

On the other hand, funeral rites and the equinoctial or Bon festival prayers, to appease the spirits of departed ancestors, are performed according to Buddhist religious rites. On this basis, it can be said that, in general, fortunate and happy events are celebrated in the Shinto religious way, while unfortunate and sad events in the Buddhist way. Ordinary Japanese, who do not even profess any religion, follow this practice.

According to one statistical survey, the Japanese have a low rate of interest in or devotion to religion on the world ranking scale. The survey, conducted by government over a twenty-year period, indicated that 65% – 75% of the Japanese do not profess any religion. Therefore, even if religious population is high, the majority may be believers in name only. There are a few real believers but many people have interest and participate in religious rituals and practices, this is the relationship between the Japanese of today and religion.

Tanaka : Yes, aren t there a lot of people? All of them have come for “Hatsumode”. The early comers start coming as early as midnight. Eee! Tsugoi deshou. Mina, hatsomoude no hitotachi desu. Hayai hito wa yunaka no 12ji goro kara kurun desuyo.

Lee : Really? I thought that the Japanese didn’t have any interest in religion. But now, I feel they are religious after all. Tanaka san! Do you often go to pray at the shrine?

Tanaka : No! I am ashamed to say that I too am only a worshipper on New Year s day. Iie! Watashi mo oshougatsu dake no shinjya de, chotto hazukashi desu.

Lee : They are throwing money in there and praying. What are they praying for? Asoko de wa okane o nageirete, nani o oinorishite irun desuka.

Tanaka : They are praying for good health and good luck for the family during the coming year. I also prayed myself for the recovery of my mother who is ill. Kotoshi ichinen no kazoku no kenkou ya kouun deshou. Watashi wa haha no byoki ga naoruyou ni oinorishimashita.

Lee : Did you? Then I too will pray that this year I‘ll be able to find a good wife. . Sou desuka. Jya! Watashi mo ii kekkonaite ga mitsukaruyou ni oinorishimasu.

Why must you have continuous improvement?

“Kaizen” is the Japanese word for ‘improvement’. It pertains to continuous improvement, whether in personal life, home life, social life or working life. Kaizen has even been credited as the key to Japan’s competitive success.

How important is continuous improvement to you in your personal life? Should you aim to be a better person, day by day, at the rate of 1% a day? Or just on one special day in a year, you increase your ability by 100%? Which do you think is easier – 1% a day improvement for 365 days? Or 365% on 31st December (so that you can relax and ‘enjoy’ life the rest of the previous 364 days?). When you improve yourself by 1% everyday, don’t you think you will be awesome after a year? When you make ‘improvement’ a habit, will it become more difficult or easier for you, as time goes on? I attended a 4-day business seminar (conducted by a multi-millionaire), in Singapore in June 2008 at the Singapore Exposition Centre. About 2,000 participants from Singapore, Malaysia, Indonesia, Thailand, Hong Kong, Philippines, Taiwan, Australia, India and Maldives attended.

In organizations with enlightened Human Resource Management departments, continuous training is critical to their organizations’ continuous drive for excellence. Formalized (out of the office) training, usually at least 5 days in a year, is planned for all staff. Informal (on the job) training is provided by constant job rotation (i.e. on average, two years in one job, before being assigned another job). An accountant could be transferred to the Information Technology department for two years on a project. An engineer could be assigned to the Human Resource department for two years, to be in-charge
of training (of engineers).

On an organizational level, the products or services that you deliver must have “use-value” which is more
than “cash-value”. This could be done by continuously improving product quality. Research and Development (R&D) is therefore critical in regard to this product quality aspect.
The moral of the story? As the saying goes, “If you are not growing, then you are dying”. Wallace D Wattles aptly wrote, “Every living thing is under this necessity for continuous advancement; where increase of life ceases dissolution and death set in at once.” Abraham Lincoln said, “I don’t think much of a man who is not wiser today than he was yesterday.” Are you ready to take action to become a Better You? An “Improved You” Model?

I wish you Success in your undertakings, and Good Health and Wealth to you and your family.
Take care!

Mr. Lim Eng Swee (date of birth: 29th May 1947) graduated from the faculty of Electrical Engineering of Kyoto University, Japan. After his graduation, he received a full year industrial training at Matsushita Electric Industrial Co. Ltd., Japan (Now known as Panasonic Corporation), where he was been widely exposed to various manufacturing technologies and Japanese work culture. He continued his work engagement with the Malaysia operation (Panasonic Manufacturing Malaysia Bhd. – PMMA) of the same company. 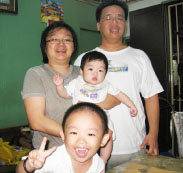 I’m now attached to Hoya Electronics which is located in the Kulim Hi-Tech Park. I’m involve in the portfolio of Environment, Safety and Health. Recently I lead the Team to pass the Certification Audit for ISO 9001 and OHSA 18001 Management System. Another recent undertaking was presenting research papers in an International Conference held in UiTM-Shah Alam and UiTM-Kota Bahru on topics of Management, Technology and Standards and will be doing the same in UPM-Kuala Lumpur very soon.

I am living in the Penang Mainland with my husband and two kids. The elder boy has just started kindergarten and the younger girl has recently reached the milestone of walking independently. I` m enjoying myself living in Penang with her variety of food and above all going to work is always free from traffic jam as I am taking the Butterworth-Kulim Expressway.

I wish you, all the very best of good health and success in your undertakings.