The 21st Annual General Meeting (AGM) has given a new line-up of the Central Committee Members (CCM). Half are new faces, and we look forward to new ideas and approaches from them. The older members will undoubtedly provide stability and continuity in policy matters.
The 7th World Convention of AOTS Alumni Societies will be held on the 11-12th September 2006 in Mumbai, India. We will have a relatively large number of delegates from Kuala Lumpur this year. We look forward to their assistance in supporting us to apply to host the next World Convention.

Being an alumni society for Malaysians who have been trained in Japan, it should be our vision to utilise the knowledge gained to be disseminated throughout our country. One good platform is to conduct training programmes to be conducted by ex-trainees. Although this has been done on a rather limited scale all these years, we need greater focus to increase our training programmes.This should be a challenge for the new CCM. Members can contribute by proposing training programmes which they believe would be useful to themselves or their organisations.

Wishing all of you success in your undertakings, and good health to you and your family. 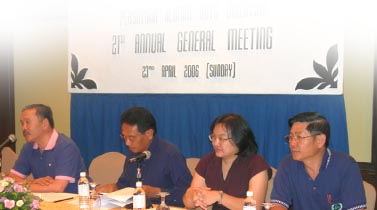 The Persatuan Alumni AOTS Malaysia (PAAM) successfully held its 21st Annual General Meeting on 23rd April 2006 at a hotel in Shah Alam, Selangor. Forty one (41) members including the Central Committee Members (CCM) and 8 observers attended this meeting. AOTS Kuala Lumpur Office was represented by its General Manager Mr. Watanabe and 2 staff. PAAM Sarawak and Johor Branch each sent their representative. The AGM commenced with the Welcome Speech from PAAM President Mr. Aziz Kamaruddin.

The highlight of the evening was the election of a new CCM. The new Central Committee Members for term 2006~2008 are as follows:-

On 18th May 2006, 18 participants from Kuala Lumpur and Seremban with their parents attended a Pre-Departure briefing at PAAM Office. This briefing was conducted by Sharon Lim, who is the Central Committee Member and has a good knowledge and experience in this
exchange program. The briefing was divided into four parts which are:

i. Planning BEFORE the trip,

ii. What to do DURING the trip,

iii. What to do BEFORE LEAVING Japan and

Sharon emphasized the importance of our Malaysians participants in the HIPPO program to be aware of the difference in cultural, social and interpersonal interactions. Participants were alerted to the various Do’s and Don’ts while they were in Japan. Mr. Willie Low (one of the participants’ parents) also shared his various experience with participants.

We wish all participants enjoy their Hippo Homestay!!

On 27th May 2006, 22 participants from Kuala Lumpur, Seremban and Sarawak were leaving for Hippo Home-stay Program in Japan. Representative from PAAM and AOTS have met the participants and their parents at KLIA. PAAM was so lucky because most of the participant parents were very cooperative to ensure the arrangement during check in time is properly done. This time, the home stay program will be organized in Nagoya, Japan from 27th May – 4th June, 2006. On behalf of Persatuan Alumni AOTS Malaysia (PAAM) we hope all of them enjoy their stay with the host families. 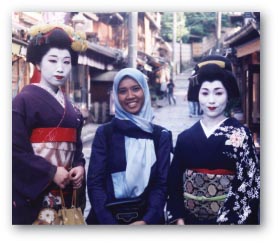 I was quite nervous about Rina-chan’s planning for Wednesday. I was going to meet a lot of HIPPO CLUB members from all over Nishinomiya City. Almost all of them brought their children together and Sanae-chan who came earlier to the house taught me few words to introduce myself and my family. I became more confident after that…

The meeting took place in Hiromi Kawasaki’s house. We called her Vita. Vita’s family was one of the very active members of the club and she had received a lot of guests before. In comparison, she could speak better English than the rest. Some of the new friends whom
I met were more fluent in Indonesian. To my surprise, some of their children could speak Russian, among the languages of countries that join the club.

After the ice-breaking session, they wanted to see me in a traditional Japanese women dress, kimono. Amazingly, among them, Sanae-chan was the only expert in dressing up a woman with a kimono. 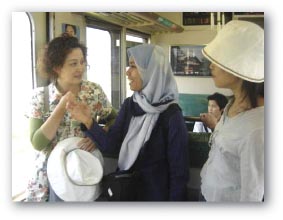 I came to know of Kobe in Japan from the earth-quake which flattened Kobe in 1995. Kobe was the itinerary for the fifth day of my visit to Japan,.

I met another friend, Nancy who teaches Japanese voluntarily. Together with Sanae-chan and Koh-chan whom I met earlier in Hippo gathering, they planned for sightseeing in Kobe Harbourland. ‘So this is the world of globalization’ just popped out of my mind when they introduced Adil, who is a Palestinian and used to stay in Europe for few years. At a huge restaurant in the Harbourland, we ate wonderful seafood and chat for hours. That one whole day was not enough for us to get to know each other. Great!

After few days, I became very impatient for dinner prepared by Rina-chan… Incredible huh? Every day’s dinner with both Rina-chan and Hirooki-chan is very long and we became more attached to each other as we share different opinions but similar hopes in life. That day, Rina-chan started to say she’s going to miss me when I have to leave soon.

Friday in Japan? How will it be? Friday in Malaysia means long lunch hour, men catching Friday prayers and supermarkets filled with women fulfilling their ‘needs’.

Early in the morning, I joined Miifa, Margarita and Pure for ceramic making. We went to the house of a sensei who teaches ceramic making. He taught Miifa and Pure before. Ironically, I never had a chance to make ceramic in Malaysia. I couldn’t believe I got to do it in Japan!

Next, we got on train to Kobe to catch Friday prayer. Nana, Azah, Rina-chan and Nancy were already waiting for us at the Kobe Mosque. 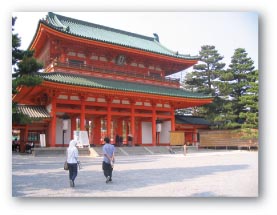 As we were walking to the mosque, suddenly somebody from behind gave salam to me. Wow… Since long time I did not heard people giving salam while in Japan. He was Jonni, also on his way to the mosque. Jonni comes from Indonesia and now undertaking a practical training in Japan.

We met other few Muslims from Pakistan, Bangladesh Indonesia and some few Japanese Muslims. We were also introduced to Lutfi an Indonesian from Bali. Being very fluent in Japanese Lutfi had been staying in Japan for almost a year!

We ate a buffet style lunch of typical Indian food but I think it was a blend of Middle Eastern food too. Japanese yogurt drink was awesome! That kind of lunch cost us ¥ 500! No wonder the restaurant owner smiled happily as we walked out. 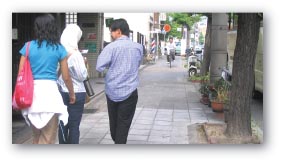 On our way home, I think Rina-chan had already started to plan what to cook that night. I do pity her. While I was organizing my stuff in their cozy reading room, I went to the kitchen several times when Rina-chan called me to choose which flavor can be eaten or not. Almost all the time I had to say ‘gomen nasai’ which means ‘sorry’ to troubled her that way. And then she would say ‘daijeboo’ which means ‘never mind’. Of course, that is the way to treat visitors, right?

A MAFAAS (Malaysian Federation of AOTS Alumni Societies) meeting was held on the morning of 28th May 2006 in Penang, chaired by Mr Johnny Yee (President of Pertubuhan Alumni ABK/ AOTS). Besides Watanabe-san (General Manager AOTS Malaysia Office), Mr Johnson Tan and Mr William Ong (both former presidents of the Singapore Alumni Society) also attended as observers. PAAM was represented by A. Aziz Y. Kamaruddin, Ms Au Yong, and Yang Chor Leong, with Subramaniam, Zakaria Mohd Rahim and Nadaraja as observers. The meeting discussed areas of co-operation. It was proposed that for future MAFAAS meetings, representatives from the Singapore Alumni Society would be invited to attend as observers. 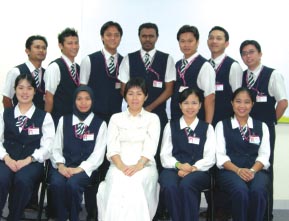 Once again, AEON (M) Sdn. Bhd. enrolled its staff for the Intensive Japanese Language
Course. Eleven students have joined this class which has started on 3rd April 2006 and will be ended on 30th June 2006.

All of them will be joining the Training Program conducted by AOTS in Japan.

If you are thinking of doing business with Japanese companies, working or planning to work for a Japanese organization, sending your staff or students for training or education in Japan, or merely contemplating on improving your grasp of the Japanese Language, the Persatuan Alumni AOTS Malaysia has just the right course to suit your requirement.

1. To enable participants to be exposed to the latest management practices of Malaysian enterprises.

2. To upgrade managerial skills of executives and senior managers of manufacturing enterprises to plan and control activities of their enterprises more efficiently.

3. To provide opportunities for the participants of the program to exchange views and experiences among themselves as well as with Malaysian Small Medium Enterprises (SMEs)

To provide opportunities to create an active business network of SMEs.