The Persatuan Alumni AOTS Malaysia’s 20th Annual General Meeting (AGM) proceeded smoothly on 10th April 2005. There were some minor changes compared to previous AGMs – one of the changes being that it was held in the afternoon instead of in the morning. The venue was at a hotel in Subang Jaya. The meeting started on time because there was a quorum long before the 2.00 p.m. scheduled time! 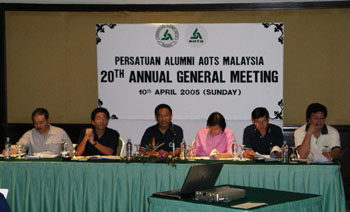 This was the last AGM that Ichikawa-san (General Manager of AOTS Kuala Lumpur office) attended. He has successfully completed his 4-year assignment in Malaysia, and he returned home safely to Tokyo on 4th May 2005. The PAAM President thanked Ichikawa-san for his hard work, and kind assistance in making sure that the AOTS-PAAM working relationship was at a high level of cooperation, for the benefit of all AOTS/PAAM members (as well as the public) in Malaysia. The President mentioned that one of the highlights of Ichikawa-san’s close cooperation was the successful signing of the “Agreement on the Work in Connection with the Recruitment and Recommendation of Participants and Other Work related to AOTS Management Training Courses in Japan” between AOTS and PAAM in 2003.

It was a blessing to see three of our four past Presidents (Mr. Michael Lim, Mr. Nik Mohd Kamil and Mr. Badaruddin) actively participate at the AGM. This augurs well for our Association.
There were no major issues brought up at the AGM. Everyone seemed happy that PAAM is quite active in organising educational and social activities. This can partly be attributed to the tremendous efforts put in by our two staff, Ms Angela and Ms Surinam. The main excitement would be generated if PAAM is given the honour of hosting the next World Convention. Thank you to all the members who participated in the AGM.

On behalf of PAAM, Ms. Au Yong and myself attended the ALEPS’ open-house on 29th January 2005 at the International Youth Center Foundation building in Kuala Lumpur. The gathering was organized in conjunction for the New Year and Hari Raya Puasa.

A good crowd of close to 100 representatives from various Japanese societies/clubs and their ALEPS committee members graced this joyful occasion. Traditional Malaysian food was served in buffet style, everyone enjoyed the food and their warm hospitality.

One of their organizing committee members En. Mohd Nizam shared with us information of their club’s activities and the brief history of their formation. It was truly a memorable gathering, the Malaysian way of cultural and tradition in celebrating festivities. 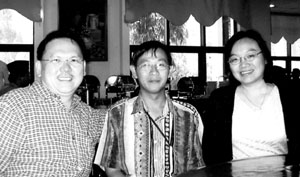 The 20th Malaysian Federation of AOTS-ABK Alumni Societies (also known as MAFAAS) meeting was successfully held on March 13, 2005 in Ipoh, Perak (which is located in between Penang & KL for the convenience of logistic for the committees). 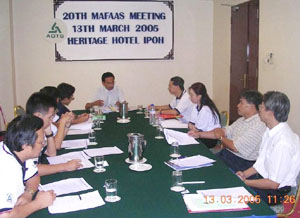 The meeting went well with suggested group projects and collaborations such as Hippo homestay, webhosting, seminars etc. The meeting ended with the announcement that Mr. Ichikawa will be leaving AOTS-KL for his new assignment in AOTS Head office in Tokyo. All the committee members took the opportunity to thank Mr. Ichikawa for his dedication and advice that resulted in a fairly active AOTS/PAAM/PAAA years during his tenure in Malaysia.

As part of our health awareness campaign to members for our 20th Anniversary celebration, on 12th March 2005, Training & Development sub-committee successfully organized an energetic yet unique tea-talk on Reiki. It was attended by 17 participants including members and non-members.

Our charismatic speaker Master Michael Lim explained that Reiki is a safe, natural hands-on therapy that promotes healing on all levels by action of a gentle, nurturing energy radiating from Reiki practitioner’s hands when applied to self or others. And at the end of his talk the master provided the participants with the opportunity to experience his chi or energy health scan.

A Farewell Dinner for Ichikawa San was held in a very memorable and joyous environment. Thank you for all members who attended the dinner.

On 20th April 2005, AOTS and PAAM staff had a special farewell lunch with Ichikawa San. This lunch was hosted by staff in appreciation of his support and services for the past four years.

Thank you very much Ichikawa San for your support and guidance for the past four years. We will remember you always in our heart.